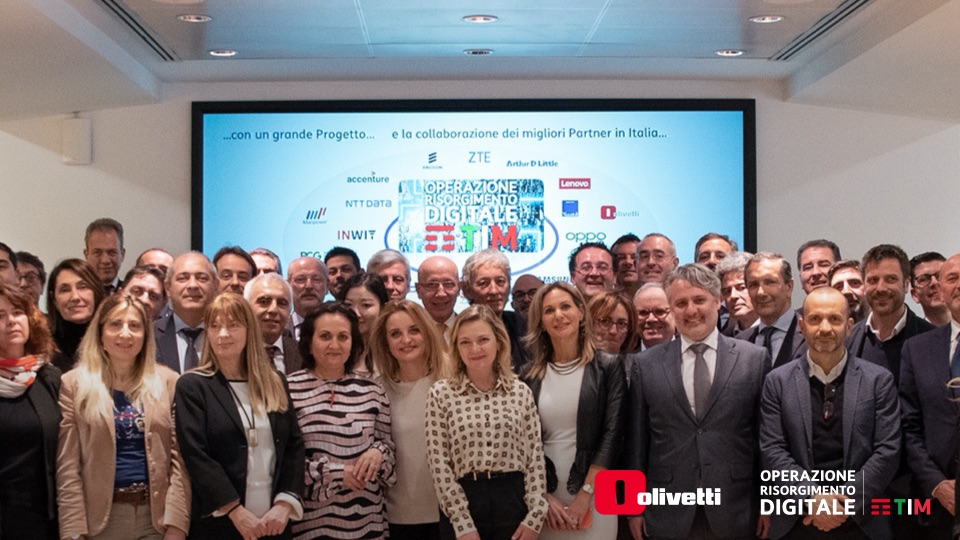 On the occasion of Safer Internet Day, the international day for a more responsible and safer use of the Internet, more than 20 new partners of excellence from industry to institutions, from trade associations to the third sector have joined “Operazione Risorgimento Digitale”, TIM’s free Internet school launched last November to promote the dissemination of digital skills among citizens, businesses and public administrations.

This broadens the scope of action of TIM's travelling initiative, which involves all of Italy’s 107 provinces with the aim of training up to 1 million people through an extensive programme of activities that will be intensified thanks to two more ‘mobile schools,’ in addition to the one already operational, and to classroom courses organised to give everyone the opportunity to become “netizens” (citizens of the Internet).

The initiative has also received support from trade associations, the third sector and important players in the field of social innovation. The new partners will support TIM in Italy’s digital transformation, bringing specific skills and know-how.

Operazione Risorgimento Digitale is carried out in collaboration with the European Commission and the State Police with the participation of Postal and Communications Police’ officers and supports the Digital Republic Manifesto promoted by the Italian Ministry of Innovation. It has also received the patronage of ANCI, the National Association of Italian municipalities. As part of the project, two important memoranda of understanding have also been signed recently with the Minister of Public Administration, the Ministry of Education and the Ministry of Justice.

The educational programme is part of a broader scenario that sees Italy still lagging behind in European rankings on the use of digital services, despite the high level of infrastructure. Therefore, Operazione Risorgimento Digitale takes on an even greater strategic and systemic dimension, with the aim of further boosting the digitalisation process and use of the resources offered by the Internet.

“TIM is particularly proud to further expand the scope of 'Operazione Risorgimento Digitale' and to enhance its effectiveness thanks to the contribution of many new partners,” said Salvatore Rossi, TIM’s Chairman. “Networking is an essential condition to achieve synergies and build strategic collaborations for the digital development of local communities. We now have an even broader spectrum of expertise at our disposal that we wish to put at the service of the country to ensure that there are more and more people on the ‘digital highways’. We are very proud to contribute once again to the growth of digital culture, providing Italy with the expertise of the entire Group as well as with its ability to bring together important public and private players.”

The project Operazione Risorgimento Digitale, started on 11 November from Marsala, has so far crossed all of Sicily’s provinces and is now travelling through Calabria. The initiative’s format provides for four weeks of courses in each city visited by the tour: the first week inside the TIM truck located in the towns’ main squares, where citizens can discover the Internet and its potential in 10 short training sessions of less than an hour during which they can learn how to use the main digital services. In the following three weeks, the courses are held in the classroom, through a programme divided into 3 modules of 2 hours each, which aim to teach participants ten easy, useful things, such as surfing and finding information online, communicating, sharing content and living their days as a digital citizen. At the same time, in collaboration with Municipal Authorities, courses for public employees are also held with the aim of providing them with the necessary skills to face the digital transformation underway in the Public Administration.

Moreover, from 24 February TIM will further boost its commitment by tripling its effort on field: every week three ‘Internet schools’ will cross Italy to give everyone the chance to become ‘netizens’. This way, every week Operazione Risorgimento Digitale will simultaneously reach three cities in different regions, thanks to the two new ‘mobile schools’ that will join the one already used in the squares. While the project will continue to cover the regions of Southern Italy (currently in Calabria and then in Campania), training activities will start at the same time in the North East (Friuli-Venezia Giulia) and North West (Liguria), thus speeding up the project’s implementation.

Those interested can sign up for the courses and ask for further information both through the dedicated toll-free number 800 860 860 and online at www.operazionerisorgimentodigitale.it. The website has been enriched with new content and allows access to the short videos “Internet lessons in 100 seconds” by Salvatore Aranzulla, one of the most famous voices in the field of technology. These offer an overview of the topics covered in the courses: connection and wifi, surfing with browsers, doing searches online, sending e-mails, using social networks, applications, SPID and e-government services, and home banking in complete safety.