SECO: industrial partnership with Olivetti, expected revenues of about 50 million euros in the three-year period 2022 - 2024 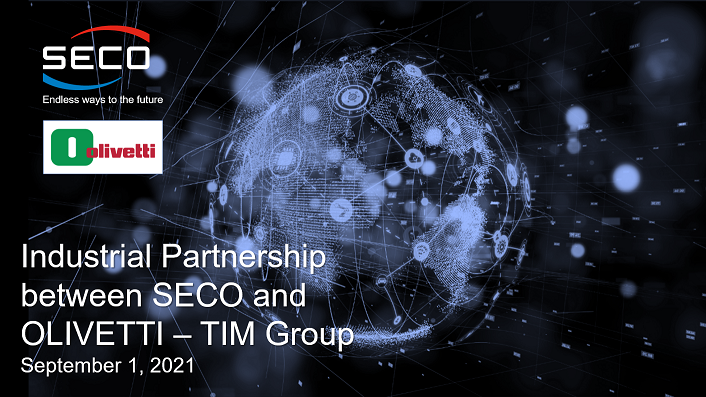 SECO: industrial partnership with Olivetti, expected revenues of about 50 million euros in the three-year period 2022 - 2024

Olivetti SpA, ("Olivetti"), the digital farm for IoT solutions of TIM Group, and SECO SpA ("SECO"), a center of excellence in the field of technological innovation and the Internet of Things, presented to the market the details of the agreement signed last August 3, 2021, that anticipates the signing of an important qualified industrial partnership between the two companies.

For SECO, revenues of around €50 million cumulative over the three-year period 2022-2024 are expected from the agreement. On the IoT services front, where growth rates are estimated at around 10%, Olivetti is aiming for a market share of 5%, for a market that will be worth around €4.5 billion in 2024.

The finalization of the partnership provides for a strengthening of industrial collaboration between the two companies. SECO thus becomes Olivetti's technology partner and preferred supplier of IoT solutions. Olivetti, for its part, becomes SECO’s reference industrial partner. During the presentation to the market, it has also been announced that Olivetti holds 9.6% of SECO's share capital, thus strengthening the financial relationship with the company based in Arezzo.

The industrial partnership between SECO and Olivetti involves the supply of hardware devices already included in SECO's current product catalogue. In addition, hardware and software solutions will be jointly developed specifically for Olivetti and distributed under the 'Olivetti powered by SECO' brand.

The partnership is designed to accelerate the digital evolution of the TIM Group's Corporate Customers in both the Large and Small to Medium Enterprise sectors, as well as the Public Administration. The products created by Olivetti through the industrial partnership with SECO will be sold exclusively by the TIM sales network. These solutions will be applied both in sectors in which Olivetti has already launched specific proposals (smart cities, urban services, industrial automation, smart agriculture, etc.) and in the sector of digital payment systems and, in general, for the world of connected objects.

"Today we are presenting to the market an important move for all of us. The partnership with Olivetti and TIM Group officially starts and leads us confidently into the next two years with an important mission: to digitalize the country starting from small and medium enterprises. SECO has the skills and technology to do this and, thanks to a player as important as Olivetti, this goal becomes possible. We are excited and look forward to working together to become leaders in a market with enormous potential", said Massimo Mauri, CEO of SECO.

"The world of IoT requires increasingly effective and scalable technological solutions that demand specific skills able to create ecosystems of solutions through partnership tools, joint ventures or acquisitions of other technological players. The launch of the industrial partnership with SECO today allows Olivetti, IoT Digital Farm of the TIM Group, to play a primary role in the future for the development, digital evolution and increased competitiveness of Italian companies and Public Administration by offering efficient, rapid adoption and value generation solutions that can also act concretely with what is made available by the National Recovery and Resilience Plan", said Roberto Tundo, CEO of OLIVETTI.

Olivetti, a historic brand of Italian industry and Digital Farm for the TIM Group's IoT solutions, operates on the domestic and international markets as a renewed and evolving reality that places the generation of value for its customers at the center of all its activities. With a wide range of cutting-edge products and services, TIM combines leadership in the retail and office segments with consolidated experience in the Internet of Things, storage and proximity data processing systems, and advanced wired, wireless and Machine-to-Machine connectivity sectors. Therefore, a distinctive positioning of competences in business enablement through digital evolution and innovation has been implemented with a portfolio of solutions addressed to the business market (B2B, B2B2C, B2C, B2G) exploiting the enabling technology guaranteed by the fixed and mobile network of TIM Group, and in particular by 5G technology.

SECO (IOT.MI), listed on the Italian Stock Exchange (STAR segment), develops and manufactures cutting-edge technological solutions, from miniaturized computers to fully customized integrated systems combining hardware and software. SECO also offers Clea, a proprietary end-to-end IoT-AI analytics software suite, made available on a SaaS basis, that allows clients to gather insightful data from their on-field devices in real time. SECO employs over 500 people worldwide and operates through 3 production plants, 6 R&D hubs and sales offices in 9 countries. With a turnover of more than €75 million as of December 31, 2020, SECO serves more than 200 blue-chip customers which are leaders in their respective fields, including Medical, Industrial Automation, Aerospace & Defense, Fitness, Vending and many other sectors. SECO R&D capabilities are further enhanced by long-lasting strategic partnerships with tech giants and collaborations with universities, research centers, and innovative start-ups. Corporate social responsibility is part of the strategy of SECO, that undertakes several actions to reduce its environmental footprint and increase its impact on its people and local communities.