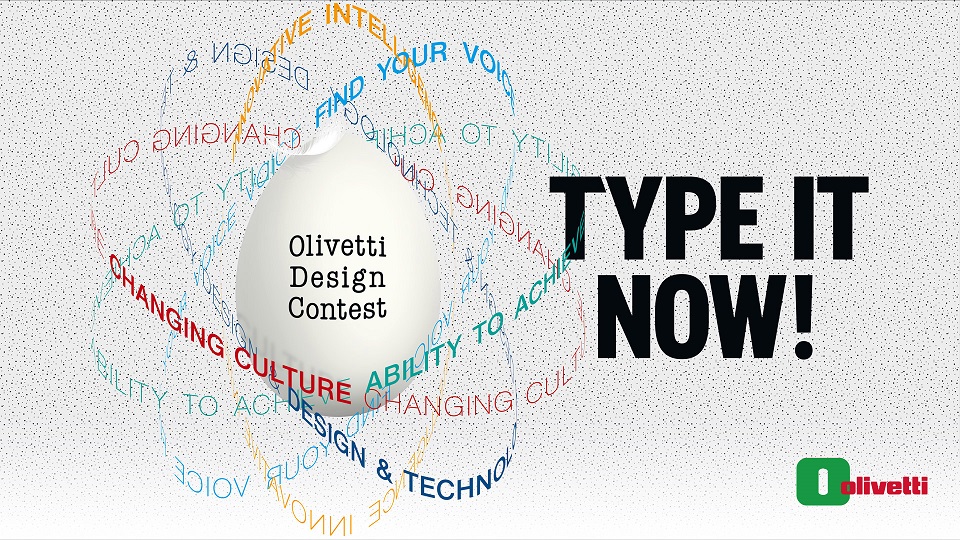 The award ceremony for the winners of the Olivetti Design Contest 2020-2021 took place today at 'Casa Blu', Olivetti’s headquarters in Ivrea. Now in its fourth year, the ideas competition aimed at students of prestigious national and international universities and design institutes has been extraordinarily successful. 22 institutes and universities took part in the 2020-2021 contest, with over 80 students presenting more than 50 projects, making this year the most international contest ever. A great result that saw students from all over the world compete in the “Call For Ideas” to create the Olivetti font.

The selected projects made an original contribution to creating a distinctive typeface called “Olivetti Type”, helping to define a corporate identity.

The first prize was shared by: Karla Guadalupe Mateos Flores and Miguel Angel Contreras Cruz (BUAP, Puebla, Mexico), for the Insigne font, and Barbara Tedeschi (CFP Bauer, Milan, Italy), for the Profile Typeface font. The third prize went to Mario De Libero (IED, Florence, Italy) for the Otello Sans font. In addition to the cash prizes (worth 1,750 and 1,000 euros), the first prize winners were awarded a 12-month internship at a Type Design studio.

In his opening words, Roberto Tundo, CEO, Olivetti, said:  “Olivetti brings the ideas competition to a close today, having attracted over 100 young men and women from all over the world who presented brilliant designs that effectively represent our history and corporate mission, and combine technological excellence with a preciously unique style, becoming a source of inspiration for citizens and entrepreneurs. After this contest, we will get to work to realize the resulting designs with the aim of creating the first 'Olivetti' typeface, a concrete symbol of the company's modernity, based on solid and universally recognised values”.

According to Emanuele Cappelli of Cappelli Identity Design, “Designing a font carries a great deal of responsibility as it involves drawing a shape to represent thought. We know how much Olivetti cared about shapes being precise in every detail. For Olivetti, designing a typeface today means being attentive to history but looking forward to the future.  The Olivetti Design Contest is a great opportunity to open up to the future. When we devised and launched the first contest in 2015, our intention was to apply the same system that Adriano Olivetti had used: believing in talent but above all in young people. The freedom to be oneself and to express oneself, in compliance with the rules, are fundamental principles for which young creatives must fight and which we must defend. We looked forward to the achievements of these young designers in the hope that one day we could say that their name was among those who had created designs for Olivetti”.

Clino Castelli, artist and designer, pointed out: “Only two months have passed since that welcome message that made us curious to discover how the current "spirit of the times” would produce new forms of aesthetic sustainability. Having worked in this field for some time, I sensed that the answer would come from a suspension of time, producing a design in a present time that is the result of oscillations between the past and future. However, none of us judges could ever have imagined that we would find ourselves in the bizarre position of being both judges of the Olivetti Design Contest 2021 and witnesses of epochal events that have changed the very perception of temporality”.

Closing the event, Gaetano di Tondo, President of the Olivetti Historical Archive Association, commented: “The proposals for the new Olivetti typeface of the future have emerged from a study and analysis of the Design Characters collection held in the Olivetti Historical Archive, which includes 657 different fonts from the past. The new Type it Now font has evolved from the Olivetti sense of community, updating it through research and by sharing contemporary design languages, to continue the ‘#storiadiinnovazione’ with a universal vision, balanced between the physical and digital world, a bridge to the future. This project has been completed at a time when Ivrea is drawing up its tender for Italian Book Capital 2022, where writing and reading are closely connected and linked to the history of Ivrea, an instrument of active citizenship and a civic literacy process".