4 WEEKS 4 INCLUSION KICKS OFF: OVER 200 COMPANIES COME TOGETHER TO SPREAD THE CULTURE OF INCLUSION 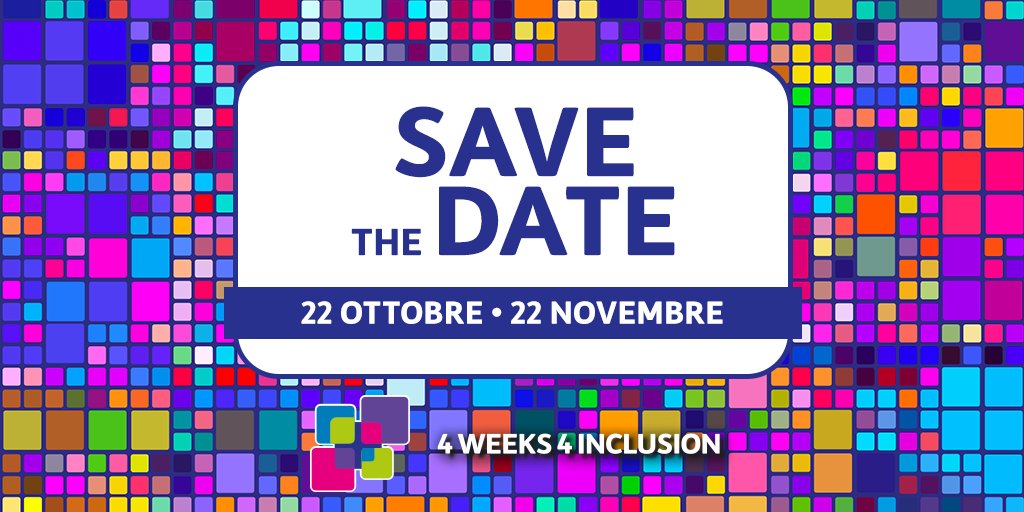 4 WEEKS 4 INCLUSION KICKS OFF: OVER 200 COMPANIES COME TOGETHER TO SPREAD THE CULTURE OF INCLUSION

Promote an interdisciplinary debate with representatives from institutions, the business community and trade unions to foster diversity. This is the goal behind the second edition of 4 Weeks 4 Inclusion, the biggest intercompany event dedicated to inclusion, which this year – for the first time in Italy – sees over 200 companies involved in accomplishing a marathon of four consecutive weeks in the name of inclusion, with a rich programme of digital events dedicated to the 700,000 employees of the partner companies.

The opening day’s proceedings kick off with a video on inclusion values narrated by the senator Liliana Segre who agreed to read the thought-provoking text.

The ‘Stories of inclusion’ event addressed the topic of social and economic development, starting with company policies on inclusion. It was attended by esteemed representatives from institutions and the world of business, such as Roberto Fico, President of the Chamber of Deputies, Elena Bonetti, Minister for Equal Opportunities and the Family, Salvatore Rossi Chairman of TIM, Laura Nurra, Head of Human Resources at American Express Italy, Ernesto Ciorra, Head of Innovability at Enel and Paola Angeletti Chief Operating Officer at Intesa Sanpaolo.

Roberto Fico, President of the Chamber of Deputies, stated: “Respect and the nurturing of differences are not just an ethical duty, but a driver and multiplier of economic and social development and one of the guidelines to follow to emerge from the crisis. The good practices that Italian companies are adopting demonstrate how the world of employment is a fundamental place to move forward through change and foster all diversities instead of discriminate against them. Ongoing exchange with institutions is necessary to build and accompany a solid path of inclusion.”

Elena Bonetti, Minister for Equal Opportunities and the Family, stated: “This year too the intercompany marathon promoted by TIM is confirmed as a valuable event to promote inclusiveness and share the best practices that help to nurture diversity on a daily basis. It is a priority challenge the government is committed to and that requires an alliance between the public and private sectors. With the first national strategy for gender equality we are choosing structural measures that remove gaps and obstacles to equality and can finally reverse the course to develop a more equal world of employment for everyone, men and women alike.”

The study Opinioni e atteggiamenti degli italiani sull’inclusione [Opinions and attitudes of Italians on inclusion], conducted by IPSOS and presented today shows how the road towards equal opportunities is still long due to the numerous cultural barriers.

The study, in fact, highlights that 54% of ‘care duties’ are carried out by working women compared to 17% by employed men; moreover, companies engaged in Corporate Social Responsibility programmes are still in the minority: a good 67% have not yet initiated any programmes in this area.

Maurizio Landini, General Secretary of the CGIL, stated: “The resources of the Italian Recovery and Resilience Plan offer us an extraordinary opportunity to relaunch the economy after the pandemic. There are reforms to be made and topics that must be addressed immediately. We can redesign the country, looking to green development and digitisation, but we must do it together. Everyone’s involvement is needed, starting with the social partners. We must come up with a new development model that centres on quality work, putting an end to precarious employment and changing laws that have got it wrong, made in the last twenty years. We need a law on representation, we must strengthen collective bargaining and create a new Workers' Statute to ensure everyone the same rights and protections and not create competition between people who need to work in order to live.”

Luigi Sbarra, General Secretary of the CISL, pointed out: “Growth and cohesion are complementary and constitutive elements of development. Good laws are not enough, we need to give prominence to dignified work, its social and relational value, and its capacity to generate wealth, integration and citizenship. The barriers that prevent entry to fragile people must be taken down, the reasons for economic democracy and the participation of workers in company decisions strengthened, and industrial relations nurtured. Collective bargaining and company welfare are fundamental tools with which to fight discrimination and social exclusion. Trade unions, businesses and the government should establish a new social pact that creates a system for skills and responsibilities to focus on a new social economy model.”

Pierpaolo Bombardieri, General Secretary of the UIL, commented: “Diversity is wealth; inclusion is a civil duty, but also an opportunity for collective growth. With this awareness and with the culture that derives from its secular and reformist history, the UIL has always had a positive approach to this matter and has fought to assert the rights of both men and women. The values of diversity and inclusion have been claimed with street demonstrations, but above all in negotiations, so that respect for people is actually implemented in the workplace, beyond any distinction. There is still a long way to go: the UIL is on the frontline of this battle for civilisation.”

The talk show ‘Aziende in Rete’ [Companies Who Network] was also held during the day, with the participation of HR managers from Avio Aero, Barilla, Snam and TIM, who presented the event with all the novelties scheduled for the 190 webinars, all with different content and formats, distributed over 4 weeks with an average of 9 events per day.

In this edition, some particularly important events, created across all the companies, will be broadcast via streaming on 4w4i.webcasting.it, on the four vertical days dedicated to as many topics:

All the information and updates on the event programme can be found on the 4w4i.it website.

The 4 Weeks 4 Inclusion (#4W4I) initiative was created by companies to raise awareness about the issues of inclusion and the development of diversity, thanks to a tightly-packed programme of shared events, webinars, digital labs and creative groups. Each year, guests and speakers switch places for four consecutive weeks, giving a concerted account of stories of inclusion and sharing best practices, models and tools for developing all kinds of diversity from disability, intergenerational debate and contributions from women to sexual orientation, gender identity, ethnicity and religion. Over 200 companies are taking part in the 2021 edition of 4 Weeks 4 Inclusion.

More information can be found at www.4w4i.it