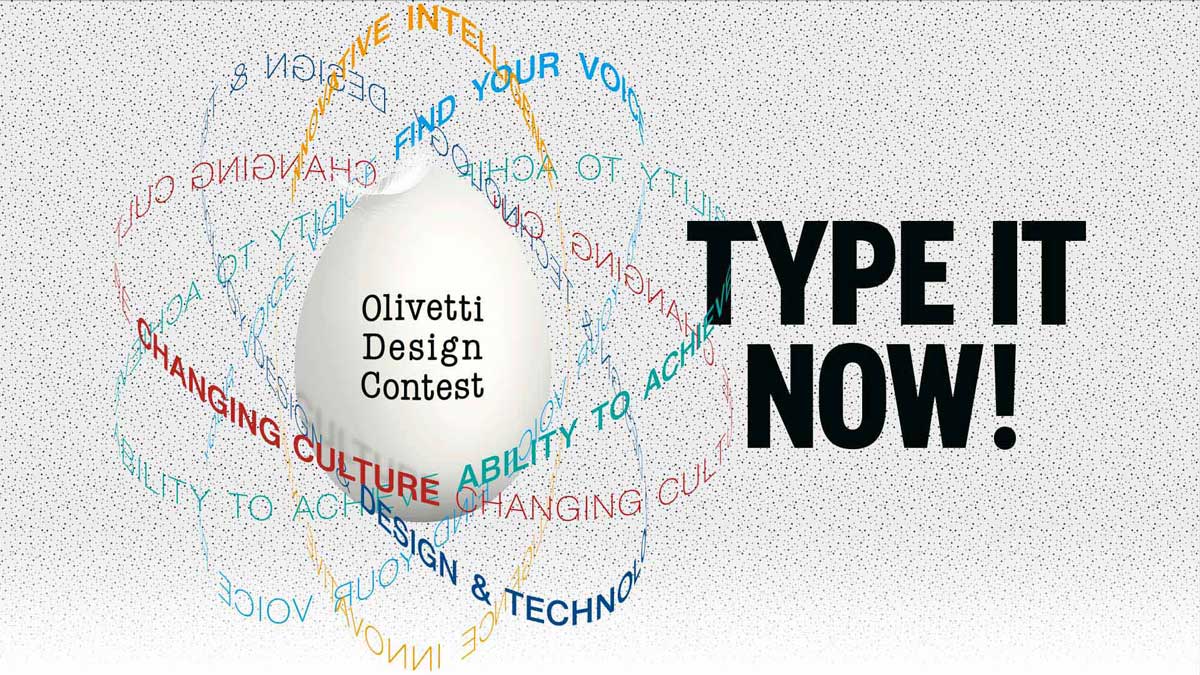 Today saw the launch of the fourth edition of the Olivetti Design Contest at the Casa Blu, the revitalised Olivetti Headquarters, now part of Unesco Heritage

The 2020-2021 edition of the Olivetti Design Contest was launched this morning at 11, within the framework of the initiatives for the Ivrea Festival of Architecture. Details of the by now respected initiative were illustrated, focusing on industry and graphical design, it aims to attract students from some of the most illustrious Italian and international Design Institutes.

This year, the call for ideas looks to award prizes to the best projects offering original contributions for the creation of a new distintive typographic character, called “Olivetti Type”. This original idea, with the power to be a ground-breaker in the future and a point of reference in the panorama of typefaces, will be key to modelling the new visual identity of Olivetti.

Opening the work session Roberto Tundo, Olivetti CEO, observed "Writing has always been the means by which culture and popular traditions have been shared from generation to generation, leaving an indelible trace. Similarly, art and style have always constituted the means used by humans for communicating their deepest emotions. Today Olivetti, that historically has always known how to highlight technological excellence with its own unmistakeable style - becoming a source of inspiration for both businesses and ordinary citizens - brings these elements again to light, inserting them seamlessly into today’s technological context through a creative Design Contest dedicated to writing. The objective is to create the first 'Olivetti' typographic character, a concrete symbol linking a past rich in values with the present day and, through new lymph, find the right way of implementing them."

Stefano Sertoli, Mayor of Ivrea commented "It gives us immense pleasure that the Fourth Edition of the Olivetti Design Contest is to be held in one of the most iconic UNESCO Heritage buildings and, in particular, on the occasion of the Ivrea Festival of Architecture 2020 - Design For The Next Community dedicated to Adriano. A festival that embraces tradition while projecting into the future and that has seen the enthusiastic participation of a large number of young people. This is the direction in which to move. Olivetti as always - coherently with its own history of innovation - continues to attract new talent giving them the space and opportunity to express themselves and realise their aims. After all, the search for aesthetics and freedom to which Adriano Olivetti constantly refers, are fundamental ingredients for any designer."

According to Emanuele Cappelli of Cappelli Identity Design "Olivetti’s power of thought makes him almost an immortal hero. Designers of all ages would like to meet him. The aim of the Design Contest is to involve young people, propelling these ideals even further".

"Architects and designers who in the past have collaborated with Olivetti have been substantially free to express their own creativity, with results universally recognised for their aesthetic and innovative qualities. Olivettian design excellence was therefore assured by the possibility of selectively chosen people (typically an “exclusive” method) rather than searching through a multitude of ideas and solutions, as made available by the current creative processes (“inclusive” in type). Therefore, the “spirit of the times” requires today a vision of the whole design process from its first beginnings, in an open, transparent, exemplary, educative way, that allows also competitive access to ideas: it is the surfacing of this necessity that has led to the Olivetti Design Contest strategy in recent times." underlined artist and designer Clino Castelli.

Closing the work session, Gaetano di Tondo, President of the Olivetti Historical Archives Association (Associazione Archivio Storico) commented "From the collection of Design Characters present in the Archive - that today houses 657 different fonts from the past - to the new Olivetti type for the future, following one of the educative and value- based learning paths from Olivetti history, based on sharing and the ideas of young people."

From the Community to the Community, is the learning path followed, based on research and global sharing using contemporary languages, to continue today the #StoriaDiInnovazione, with a vision once more universal, thanks also to membership of the World Design Organization. Design for the next Community for an Archive signifies finding the right balance between physical and digital, a bridge towards the future. The reason for which, on the occasion of the 70th Anniversary of the Lettera 22, we are working towards the creation of the Lettera 22 Type, first concrete example of affirming our past history.

The Contest is promoted by Olivetti in partnership with Italian and International Design Institutes.

Regulations and associated Information material can be downloaded from the section“Olivetti Design Contest 2020/2021” on the web site www.olivetti.com